Queen of the Inhumans, Medusa, civilian name Medusalith Amaquelin, is a character you could first recruit to your academy during the Inhumans Event. Her Recruitment Quest is Get Medusa! Her Mission Board Quests can be found here.

Medusa was never released for combat in Avengers Academy 2.0.

Medusa's Rank 5 appearance is a purple bodysuit with a purple skirt, gold belt, and a purple headpiece that frames her face. Her eyes are solid white with no pupil.

Medusa charges Auran with looking out for anything in the Midgardian world that might post a threat to the Inhumans.

Medusa has a lot of faith in Inferno, even though he accidentally burned one of her dresses.

Medusa warned Karnak that if he goes too far when fighting against a mind-controlled Black Bolt, then he'll have to face her. Later, she tasked him with the job of finding and training the NuHumans.

Using his Cat Loki outfit, Loki tried to convince Medusa he was an Inhuman in order to get closer to the Attilan throne.

Wasp has a bit of a crush on Medusa.

New Recruit Medusa
Add a photo to this gallery 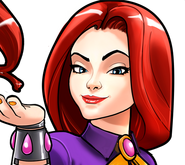 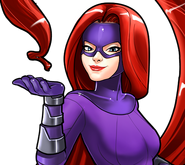 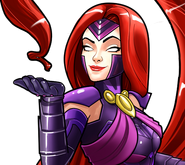 Medusa Rank 5
Add a photo to this gallery
Retrieved from "https://avengers-academy.fandom.com/wiki/Medusa?oldid=59156"
Community content is available under CC-BY-SA unless otherwise noted.