Model and actress Iron Spider, civilian name Mary Jane Watson, is a character you could first recruit to your academy during the Spider-Man Event. Her Recruitment Quest is Hit the Jackpot! Her Mission Board Quests can be found here.

Each time Mary Jane is upgraded, her Power Level increases.

Mary Jane's Rank 1 outfit is a casual blouse with a spider logo in a heart shape, jeans ripped at the knees, white sneakers, gold bracelets, and a gold necklace with a triangular pendant. She is wearing a backpack which her Iron Spider legs deploy from.

Mary Jane's Rank 3 outfit is jeans, a red and yellow jacket with gold pieces of armor on her wrists, waist, and shoulders, white sneakers with red and yellow toes, and a choker with a large gold pendant hanging from it. Her Iron Spider backpack is more incorporated into her outfit.

Mary Jane's Rank 5 outfit is her Iron Spider armor. She is not wearing her helmet.

Iron Man made the Iron Spider outfit for Mary Jane.

Spider-Man saved Mary Jane multiple times in the past, and he has a crush on her. She joined the Academy because she wanted to prove Spider-Man's innocence. 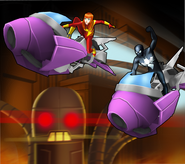 Mary Jane Rank 1 Model
Add a photo to this gallery 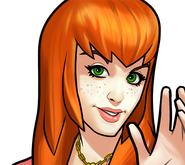 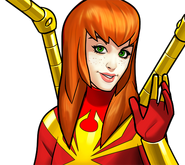 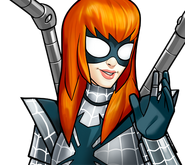 Armoured Mary Jane
Add a photo to this gallery
Retrieved from "https://avengers-academy.fandom.com/wiki/Mary_Jane?oldid=58089"
Community content is available under CC-BY-SA unless otherwise noted.