Always ready to party, Mandarin, civilian name unknown, is a character you could first recruit to your academy during the Back to School Event. His Recruitment Quest is Get Mandarin! His Mission Board Quests can be found here.

Each time Mandarin is upgraded, his Power Level increases.

Mandarin's Rank 1 outfit is a black short-sleeved shirt with gold dragons embroidered on the front, green slacks, brown and orange shoes, a gold watch, his rings, and a green necklace.

Mandarin's Rank 3 outfit is a black robe with gold trim and an embroidered dragon on the back, over a green tunic with gold trim, green slacks, black boots, a gold watch, his rings, and a green necklace.

Iron Man convinced Mandarin to join Avengers Academy and use his rings to help take back control of the Starkbot prototypes from Arnim Zola. While Mandarin was initially reluctant to get involved, as soon as he realized Zola was delaying Tony's back-to-school party, he immediately joined the fight.

Nick Fury told Fin Fang Foom that he knows that Mandarin has his rings, but he wasn't able to locate him at the time.

Mandarin is voiced by ???

Mandarin Rank 5
Add a photo to this gallery 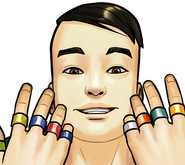 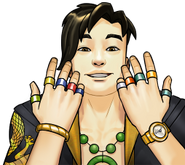 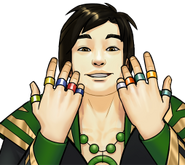 Mandarin Rank 5
Add a photo to this gallery
Retrieved from "https://avengers-academy.fandom.com/wiki/Mandarin?oldid=57976"
Community content is available under CC-BY-SA unless otherwise noted.