"Biochemist. Guardian of the Nexus of All Realities. Green Thumb."

A biochemistry professor transformed into vegetation, Man-Thing, civilian name Ted Sallis, is a character you could first recruit to your academy during the Avengers Halloween Event 2017. His Recruitment Quest is Get Man-Thing! His Mission Board Quests can be found here.

Man-Thing was never released for combat in Avengers Academy 2.0.

Man-Thing's Rank 5 appearance is a black S.H.I.E.L.D. uniform with white trim and a white utility belt.

Dr. Ted Sallis, a biochemist, was transformed into the Man-Thing during an accident with his experiment to reproduce the super soldier serum, Project Gladiator. The transformation wiped his mind, however he later regained his memories.

Man-Thing is the current Guardian of the Nexus of All Realities.

Hank Pym thinks Man-Thing's brilliant, and is a huge fan of Project Gladiator.

Man-Thing used the Nexus of All Realities to teleport Howard the Duck to Avengers Academy in order to prepare for return of Thanos.

Vampire by Night helps Man-Thing brainstorm ways to communicate and make friends with the other Academy students.

Man-Thing Rank 5
Add a photo to this gallery 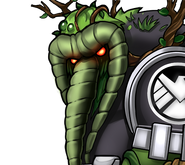 Man-Thing Rank 5
Add a photo to this gallery
Retrieved from "https://avengers-academy.fandom.com/wiki/Man-Thing?oldid=57988"
Community content is available under CC-BY-SA unless otherwise noted.