The leader of Dark Elves, Malekith, is the primary antagonist in the A-Force Event. During the event, he sent Frost Giants to battle the students. He wielded the Casket of Ancient Winters.

He also appeared as an antagonist in the Warriors Three Special Event.

Malekith later used the Casket to bring eternal winter to Earth and create a new kingdom for the Dark Elves and Frost Giants.

During the Thor: Ragnarok Event, Malekith overheard Mephisto and Hela discussing their plans for Midgard. He encouraged the Dark Elves to flee before there was nothing left of the planet.

Malekith and Loki used to play a weekly poker game together. It taught Malekith to become quite skilled at recognizing lies.

Malekith and his followers stole the Casket of Ancient Winters from Moon Knight's vault in New York.

Odin and Malekith are old enemies, and yet Odin has a bad feeling for him about the wrong hands of Destroyer. 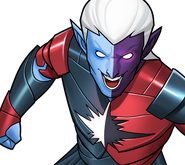 Add a photo to this gallery
Retrieved from "https://avengers-academy.fandom.com/wiki/Malekith?oldid=59753"
Community content is available under CC-BY-SA unless otherwise noted.