Male
Maestro, a far-future Hulk from another universe, is the primary antagonist in the Multiverse Special Event. He utilizes both Bruce Banner’s incredible intelligence and the Green Goliath’s nastier qualities to rule with an iron fist.

Hungry for power, he’s taken to conquering various alternate Earths throughout the multiverse. The opportunity to prove his might against the combined power of Avengers Academy’s students and faculty, and a chance to fight Thanos at the same time became too hard to pass up.

During the event, he sent Thor Noir, Keeper Murdock, and Ghost Rider 2099 to battle the students.

Maestro has green skin, a white beard and mustache, and is balding with white hair. He wears purple pants, and gold gauntlets. He's decorated with the uniform items from Avengers he killed across other the multiverse.

Abomination admires Maestro as a legend in the evil Hulk community, and asks him for advice.

Maestro pulled Keeper Murdock from his own hellish dimension, promising him that the Avengers Academy has an object that can help save his own dimension in exchange for his service.

Loki's nickname for Maestro is "Micetoes."

Maestro convinces Thor Noir to be his enforcer by telling him lies that the Avengers Academy students are abusing their power. 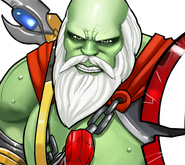 Maestro
Add a photo to this gallery
Retrieved from "https://avengers-academy.fandom.com/wiki/Maestro?oldid=50740"
Community content is available under CC-BY-SA unless otherwise noted.