"You can think of me as a more formidable, intelligent, and beautiful face for a superior institution. Are you considering a transfer?"

The former leader of Hydra School, Madame Hydra, civilian name Ophelia Sarkissian, is a character you could first recruit to your academy during the Civil War Event. Her Recruitment Quest is Headmistress of Mayhem, Pt. 4. Her Mission Board Quests can be found here.

Madame Hydra was never released for combat in Avengers Academy 2.0.

Madame Hydra's Rank 1 outfit is a green and black dress-suit combination with Hydra logos on her throat and sleeves. She wears black gloves and black open toe boots.

Madame Hydra's Rank 5 outfit is a long green coat over a dark green dress shirt with a gold belt, green pants with gold buttons, and green boots. She wears a green hat and a holster on each thigh.

Madame Hydra led the Hydra School until Red Skull, her protégé, forcefully stole the organization from her during the Civil War event.

Madame Hydra tried to recruit Enchantress to be the figurehead of Hydra School.

Madame Hydra tried to convince the Winter Soldier to join Avengers Academy, but he initially refused.

Madame Hydra is highly entertained by Zombie Baron Zemo. After the battle was over, she wanted to parade him around town in order to humiliate Baron Zemo.

Madame Hydra is voiced by ???.

Zombie Madame Hydra Ad
Add a photo to this gallery 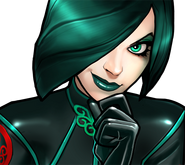 Zombie Madame Hydra
Add a photo to this gallery
Retrieved from "https://avengers-academy.fandom.com/wiki/Madame_Hydra?oldid=59224"
Community content is available under CC-BY-SA unless otherwise noted.