Female
Madame Gao is the new leader of the ninja/criminal clan known as the Hand. She is the main antagonist in the Defenders Event. During the event, she sent Hand ninjas and Stick to battle the students.

Madame Gao took over Kingpin's criminal scheme after his defeat at the hands of the Avengers Academy's students. She kidnapped the Defenders' allies, forcing them to regroup. With a firm hold on Hell’s Kitchen, and the combined resources of both the Hand and Kingpin’s entire operation, Madame Gao set her sights on retrieving a powerful artifact that Director Fury has locked away in one of his secret vaults, launching a full-scale assault on Avengers Academy.

Madame Gao is an elderly lady with fair skin, black hair, and brown eyes. She wears a buttoned up black jacket over a white blouse, and a black skirt.

Madame Gao sends the Hand Ninja Boss to battle the Avengers while she searches through Nick Fury's vaults. Later, he informs her that the Hand voted to let her go, and elect a new leader.

Hank wants to run some experiments to discover the secret of Madame Gao's longevity.

Mephisto offered to help Madame Gao escape from her cell if she showed him how to enter the gateway to K'un-Lun.

Stick worked for Madame Gao when she took over Hell's Kitchen and attacked Avengers Academy. He planned on betraying her, however she anticipated that. She wanted him to be the first person to touch an artifact in Fury's vaults so he'd be immediately incinerated.

Madame Gao and Stick
Add a photo to this gallery 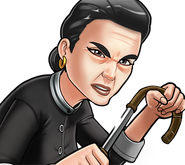 Madame Gao
Add a photo to this gallery
Retrieved from "https://avengers-academy.fandom.com/wiki/Madame_Gao?oldid=46329"
Community content is available under CC-BY-SA unless otherwise noted.