"The first Midgardian to mention my brother gets sent to the depths of Niffleheim."

The mischievous, dance-loving, Loki Laufeyson is the third recruitable character in Avengers Academy. His Recruitment Quest is Asgardian Grudge. His Mission Board Quests can be found here.

Each time Loki is upgraded, his Power Level increases.

Loki's Rank 1 outfit consists of a thigh-length green winter coat, a black vest, a yellow shirt, a black tie, and black pants. He's holding a short scepter with a round top.

Loki's Rank 3 outfit is midway between his two outfits. The coat is now knee-length and has yellow accents, and the scepter now has a pointed top. He is also wearing a helm with gold horns.

Loki's Rank 5 outfit is his full costume. His coat is now shin-length, and he's wearing a green tunic under it. His scepter now has a longer point. The horns on his helm are dramatically bigger than they were for Rank 3. This outfit is very similar to his costume in the films.

Loki's nickname for A-Bomb is "Blueberry".

Loki's nickname for America Chavez is "Asparagus Chavez." He warned her that her home dimension was about to be destroyed, giving her time to save it.

Loki's nickname for Auran is "Moron." Upon Auran's arrival at Avengers Academy, he deliberately does everything he can to irritate her. He even pays Crossbones with pizza to keep her from getting any sleep.

T'Challa is initially friendly to Loki, inviting him to explore the Wakandan Embassy. Loki tries out the nickname "Dark Leopard," to which T'Challa angrily responds by telling Loki not to disrespect the name of the Black Panther...and for once, Loki seems intimidated enough to back off.

Loki and Black Widow often end up as allies of convenience, usually in pursuit of Nick Fury's secrets. Loki's nickname for her is "Widow Woman". He has a grudging respect of both her abilities and cunning personality, and they've gone on a flirty study date as of Fight Club, Pt. 3.

Loki's nickname for Blade was never given, due to the fact Blade threatened to cut off his head if Loki so much as called him one.

Loki's nickname for Crossbones is "Bone Head". In his campaign to torment Auran, Loki pays Crossbones with pizza to make a lot of noise and keep her from getting any sleep.

Loki's nickname for Crystal is "Crinkle." He tries to gain her favor when they meet, but she quickly calls him out for sucking up to her because of her royal family.

Loki offered to help the Dark Elf Boss escape from Hela if he agreed to arrange a meeting between Loki and the Frost Giants.

Loki's nickname for Electro is "Electricity-Man".

Enchantress works with Loki or against him as the mood strikes her. They don't get along well, and they are constantly competing against each other, with Enchantress trying to humiliate Loki as often as she can. Her beauty and seduction techniques don't affect Loki the way they tend to affect other male characters in the game—possibly because of his skill in magic, or the fact that they're both Asgardians.

Loki's nickname for Falcon is "Bird-Man". Tony once tried to get Falcon and Loki to hang out together in the quest Guy Time, Pt. 1. Falcon and Loki don't interact much, and they don't seem to get along well.

Loki's nickname for Foggy Nelson is "Fatty Nielsen". Loki and Foggy like to party together.

Loki is Frigga's adopted son. Despite Loki's turbulent relationship with the rest of his relatives, he's openly affectionate and fiercely loyal to Frigga. He was deeply concerned for her when she was captured during the Legends Assemble Event.

When Loki became Kid Loki, Frigga told him she'd always support him, but she missed his mischievousness, and that he's always perfect in her eyes.

Loki's nickname for Gamora is "Greenmora".

Ghost thinks Loki is mean to everyone in order to hide his insecurities.

Loki's nickname for Green Goblin is "Emerald Gremlin". Loki tried to control Norman's Green Goblin personality, but ended up being tricked into unleashing the Green Goblin instead.

Loki thinks Hairball is superior to the rest of the Avengers Academy students.

Hawkeye was very excited to finally receive his nickname from Loki, but his hearing aids failed right as Loki was about to tell him.

Loki's nickname for Heimdall is "Heisenberg." Heimdall threatened to bar Loki from Club A's dance floor if Loki didn't start calling him by his real name.

Loki is impressed Hellcat went to Hell and faced Mephisto. He offered his assistance if she ever decided to fight demons again.

Loki's nickname for Hulkling is "Moldthing."

Loki's nickname for Tony is "Armor Man". Loki and Tony tend to get along pretty well. In the quest Loki n' Tony, Pt. 1, Tony said that Loki is "so bitter and confrontational, like one of [his] dates but with prettier hair."

Loki's nickname for Jocasta is "Jowaspa".

Loki's nickname for the Kingpin is "King Potato." Kingpin propositions Loki to represent him as his lawyer in his legal case against Nick Fury.

Loki's nickname for Leader is "Peeper."

Loki's nickname for The Lizard is "Crocodile".

Loki's nickname for Lucky is "Lumpy the Lasagna Mongrel".

Loki's nickname for Maestro is "Micetoes."

Malekith and Loki used to play a weekly poker game together. It taught Malekith to become quite skilled at recognizing lies.

Using his Cat Loki outfit, Loki tried to convince Medusa he was an Inhuman in order to get closer to the Attilan throne.

Loki's nickname for Mordo is "Floorboardo".

Loki shows great distaste over his father Odin eventually going as far as plotting to overthrow him. However, their relationship lightened when Odin decided to be more hands-on with Loki during the Legends Assemble Event.

Loki's nickname for Rocket Raccoon is "Raucous Rodent". Rocket responds with his own (less joking) insults, angering Loki so much that both Pepper and Odin speak to Rocket about the importance of being slightly more civil with fellow students.

When Satana joined the Academy, Loki mistakenly thought she was the famous guitarist Santana.

Loki's nickname for Singularity is "Space-Case".

Loki's nickname for Spider-Gwen is "Spider-Greg".

Loki's nickname for Spider-Ham was "Peter Porker", but after learning that was Spider-Ham's real name he changed it to "Preston Porkchop".

Loki's nickname for Spider-Man 2099 is "Spider-Man-Something-Something".

Loki is Thor's adopted brother. Loki is always seeking to best Thor and prove he's more suited for the throne.

When Loki became Kid Loki, he admitted he tormented Thor more than anyone, and wanted to perform one last good deed in his honor before he turned back to his original self. Thor's touched by the gesture, and they end up sharing nachos together.

Loki's nickname for Thor is "Thorita".

Loki's nickname for Ultron is "Oldthong".

Loki's nickname for Union Jack is "Flag Man". They seem to get along well, as Union Jack tends to respond good-naturedly to Loki's sarcasm.

Loki's nickname for Venom is "Venison", or "Eddie Venison".

Loki's nickname for Vision is "Half-Man".

Loki's nickname for Janet is "Bug Woman". Wasp already knew Loki before the Academy, as she had posted pictures of him from a party as part of their prank war. They tend to get along well, as Jan is friends with almost everyone.

Loki’s nickname for Wiccan is “Flipper”. 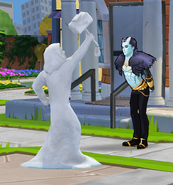 Loki trying to mess with Thor's I.D. picture
Add a photo to this gallery 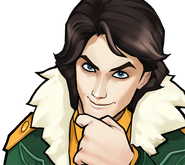 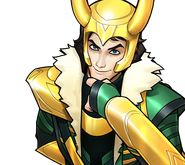 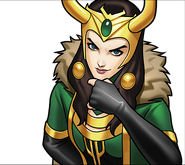 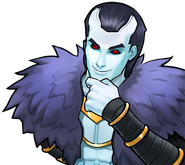 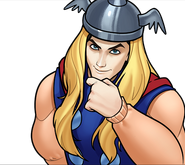 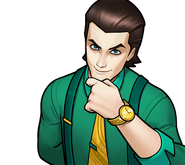 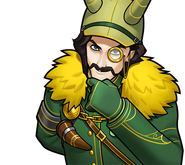 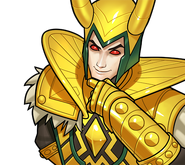 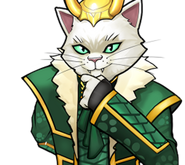 Jester Loki
Add a photo to this gallery
Retrieved from "https://avengers-academy.fandom.com/wiki/Loki?oldid=58964"
Community content is available under CC-BY-SA unless otherwise noted.