Guardians of the Galaxy

"Plant Creature from Planet X. He is Groot. He is cute."

Lil' Groot is a character you could first recruit to your academy during the Guardians of the Galaxy Vol. 2 Event. His Recruitment Quest is Get Lil' Groot! His Mission Board Quests can be found here.

Each time Lil' Groot is upgraded, his Power Level increases.

Lil' Groot's Rank 5 appearance is a red jumpsuit with brown buckles on the legs and sleeves.

Returning Hero Lil' Groot
Add a photo to this gallery 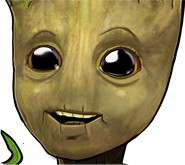 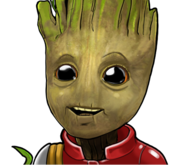 Lil' Groot Rank 5
Add a photo to this gallery
Retrieved from "https://avengers-academy.fandom.com/wiki/Lil%27_Groot?oldid=59213"
Community content is available under CC-BY-SA unless otherwise noted.