The Leader, civilian name Samuel Sterns, is the primary antagonist of the Gamma Attack! Event. He could later be recruited to Avengers Academy after his defeat during the Legends Assemble Event. His Recruitment Quest is Get Leader! His mission board quests can be found here.

Level 6 (to start the event)

Leader was never released for combat in Avengers Academy 2.0.

Leader's Rank 1 appearance is an orange long-sleeved shirt and black pants. He has a golden belt and golden bracer on his left forearm.

Leader's Rank 3 appearance is a orange jumpsuit with golden bracers on each hand.

Leader's Rank 5 appearance is a mostly orange jumpsuit, with black around the shoulders and the waist area. He also has black boots, and a glass container around his head.

During the Gamma Attack! Event, Leader attacked Avengers Academy and mind-controlled both A-Bomb and Red Hulk to do his bidding.

A-Bomb was mind-controlled by the Leader during the Gamma Attack! event.

The Leader apologizes to Hulk after his second defeat in the Legends Assemble Event and they make amends.

Loki's nickname for Leader is "Peeper."

M.O.D.O.K. asks Leader for his help to get revenge on and imprison Scientist Supreme. Leader agrees to help, and M.O.D.O.K. is thrilled to be the "friendly henchman."

Red Hulk was mind-controlled by the Leader during the Gamma Attack! event.

Leader is voiced by Vincent Melamed.

Leader arrives as a Boss Fight

News Report on The Leader's attack

The Leader sitting on his spaceship during the Gamma Attack! event 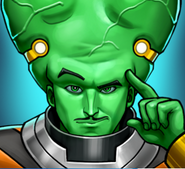 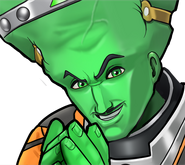 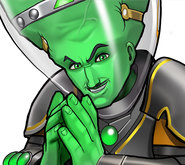 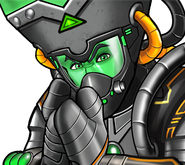 Cyborg Leader
Add a photo to this gallery
Retrieved from "https://avengers-academy.fandom.com/wiki/Leader?oldid=59324"
Community content is available under CC-BY-SA unless otherwise noted.