A gladiator champion, Korg was first introduced as an antagonist, fighting for Hela. He could later be recruited to your academy after his defeat during the Thor: Ragnarok Event. His Recruitment Quest is Get Korg! His Mission Board Quests can be found here.

Each time Korg is upgraded, his Power Level increases.

Korg's Rank 1 appearance is a blue and grey football jersey with the number '33' on the chest, blue and grey wristbands, and black shorts.

Korg's Rank 3 appearance consists of armor. He wears large shoulder plates that strap over his chest in an X. He wears a belted gray skirt with armor plating on the sides and gladiator sandals, and metal cuffs on his wrists.

Korg's Rank 5 appearance is more armor. His shoulder plates are larger, and he now wears a spiked helmet. His wrist cuffs are also larger and spiked.

The Grandmaster imprisoned Korg and forced him to fight in his gladiator tournament. Korg was separated from his team, the Warbound, and boyfriend Hiroim. When Hela captured the Grandmaster and all of his gladiators, she threatened to destroy Korg's home planet, Ria, if he didn't fight for her. During the Thor: Ragnarok Event, Odin convinced Korg to stop fighting for Hela, and join the Avengers Academy.

After joining the Academy, Korg is intrigued by the Midgard sport football. He established an Academy football team to build teamwork and cooperative battle strategies. The team consisted of Wasp, Thor, and the Hulk.

Cosmo the Spacedog alerted Korg that the Imperials were trying to take over Sakaar once again. Anxious that everything the Warbound accomplished by overthrowing the Red King could be undone, Korg borrowed the Milano from Star-Lord, and flew to Sakaar with the other football team members. The Avengers defeated the Imperials, preserving Sakaar's independence, and saved the Warbound and Korg's boyfriend Hiroim.

The Grandmaster held Korg captive, and forced him to fight in his gladiator tournament.

Hela captured Korg and threatened to destroy his home planet if he didn't fight for her.

Hiroim is Korg's boyfriend and fellow member of the Warbound. Korg led the Avengers to aid Hiroim and the Warbound against their battle with the Imperials on Sakaar.

Star-Lord loaned Korg his ship, the Milano, in exchange for a game of space football.

Korg is voiced by Kevin Urban.

Korg arrives as a boss

New Recruit Korg
Add a photo to this gallery 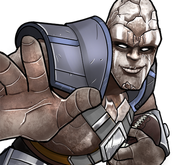 Korg Rank 5
Add a photo to this gallery
Retrieved from "https://avengers-academy.fandom.com/wiki/Korg?oldid=57942"
Community content is available under CC-BY-SA unless otherwise noted.