The head of The Hand, Kingpin, civilian name Wilson Grant Fisk, is the primary antagonist in the Daredevil Event. During the event, he sent Hand Ninjas to battle the students.

He also appeared as an antagonist in the Avengers Under Siege Event, Luke Cage Event, and Hell's Kitchen Halloween Event.

The requirements for Kingpin's Cell are listed here.

Kingpin wears a white jacket with purple sleeves over a black shirt. He has fair skin and brown eyes.

Count Nefaria's defeat left a power vacuum in New York, and the Kingpin rushed to fill it. He stole robot prototypes from Nightshade, disguised them as Hand ninjas, and unleashed them on Harlem.

Kingpin made a bargain with Mephisto to learn Daredevil's real identity, Matt Murdock. He told Madame Gao that he found out Daredevil's identity so she'd let him use the Hand to attack the Academy. Kingpin threatened to expose Daredevil's secret identity, and make his loved ones vulnerable to attack from the super hero's many enemies. Daredevil decided to make his identity public, negating Kingpin's threat.

Kingpin freely tells Auran about the counterfeit Terrigen Crystals on the streets because he enjoys talking about street crime so much.

Kingpin hired Bullseye to assassinate Daredevil, but Bullseye turns on him.

Hela and Kingpin worked together under Thanos' orders to free all the caged villains at Avengers Academy and steal weapons and artifacts from the Academy vaults.

Loki's nickname for the Kingpin is "King Potato." Kingpin propositions Loki to represent him as his lawyer in his legal case against Nick Fury.

Mephisto and Kingpin worked together under Thanos' orders to free all the caged villains at Avengers Academy and steal weapons and artifacts from the Academy vaults.

Kingpin stole some of Nightshade's robot prototypes and disguised them as Hand ninjas.

Thanos ordered Kingpin to work with the other caged villains at the Academy to orchestrate a jailbreak and steal artifacts. 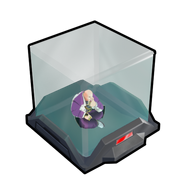 Kingpin trapped in his cell

Kingpin
Add a photo to this gallery 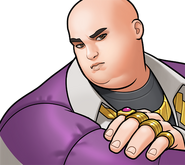 Kingpin
Add a photo to this gallery
Retrieved from "https://avengers-academy.fandom.com/wiki/Kingpin?oldid=59571"
Community content is available under CC-BY-SA unless otherwise noted.