Cousin of the Crown Prince, Killmonger, civilian name Erik Killmonger, is a character you could first recruit to your academy during the Infinity War Event. His Recruitment Quest is Get Killmonger! His Mission Board Quests can be found here.

Each time Killmonger is upgraded, his Power Level increases.

Killmonger's Rank 1 outfit is a jean jacket with wool trim over a grey shirt, green and brown camo pants, a black belt, black boots, a gold necklace, and gold glasses.

Killmonger's Rank 3 outfit is a black and gold tactical vest over a long sleeve blue shirt, green and brown camo pants, a black belt, black boots, an African mask on his back, and he now has a mustache and beard.

Erik Killmonger is originally from Oakland.

After joining the Avengers Academy, Killmonger began putting together his own army to fight Thanos because he claimed that he didn't trust the Avengers to do it. He convinced Shuri to equip his army with Vibranium blasters. Okoye agreed to join him in battle in order to protect her fellow Wakandans fighting for Killmonger.

Killmonger attempted to recruit Captain America to his army, but he refused to join.

Nick Fury tried and failed to convince Killmonger not to attack Thanos on his own, because he thought it was a suicide mission.

Okoye agreed to fight alongside Killmonger in order to protect her fellow Wakandans.

Killmonger is voiced by ???

Killmonger's Profile
Add a photo to this gallery 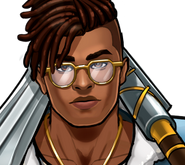 Killmonger Rank 5
Add a photo to this gallery
Retrieved from "https://avengers-academy.fandom.com/wiki/Killmonger?oldid=57960"
Community content is available under CC-BY-SA unless otherwise noted.