Desperate for help in saving his own dimension, Keeper Murdock was first introduced as an antagonist, fighting for Maestro. He could later be recruited to your academy after his defeat during the Multiverse Special Event. His Recruitment Quest is Get Keeper Murdock! His Mission Board Quests can be found here.

Keeper Murdock was never released for combat in Avengers Academy 2.0.

Keeper Murdock's Rank 1 appearance is a long sleeve red shirt, with the sleeves pushed up to his elbows. He wears red pants, red boots, a red belt with silver buckle, a white bow-tie, red fingerless gloves, and his silver wrap-around visor.

Keeper Murdock's Rank 5 appearance is an armored red suit with white trim, and a red cowl with silver horns.

Keeper Murdock and Daredevil don't get along, and they're very competitive. Daredevil doesn't trust him because he worked with Maestro.

Elektra is thrilled about Keeper Murdock's arrival. She said having him and Daredevil at the Academy at the same time is like a dream come true.

Maestro pulled Keeper Murdock from his own hellish dimension. He lies to him, promising that the Avengers Academy has an object that can help save his own dimension in exchange for his service.

Nebula relates to Keeper Murdock because they both come from a place of pain and were manipulated by a tyrant.

Keeper Murdock arrives as a boss

Keeper Murdock Rank 5
Add a photo to this gallery 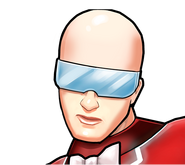 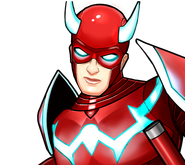 Keeper Murdock Rank 5
Add a photo to this gallery
Retrieved from "https://avengers-academy.fandom.com/wiki/Keeper_Murdock?oldid=58080"
Community content is available under CC-BY-SA unless otherwise noted.