Karnak was first introduced as an antagonist, fighting for Maximus the Mad. He could later be recruited to your academy after his defeat during the Inhumans Event. His Recruitment Quest is Get Karnak! His Mission Board Quests can be found here.

Karnak was never released for combat in Avengers Academy 2.0.

Karnak's Rank 1 appearance is a green, unzipped jacket with the hood up, a white t-shirt with green bulls-eye in the center, black jeans, and green, lace-up boots.

Karnak's Rank 3 appearance is a green, unzipped jacket with the hood down, a white t-shirt with green bulls-eye in the center, a wide green and grey belt over his jacket, giving it a tunic appearance. He also wears black jeans, and green, lace-up boots.

Karnak's Rank 5 appearance is a green, mid-length robe, with a light green patterned design on the cuffs of his sleeves and the front panel of the robe. A wide green and grey sash is wrapped around his waist, and he wears black trousers with kneepads, and knee-high green boots.

Danny built a chill zone for Karnak with lots of scented candles and a soundtrack of whale noises.

Maximus brainwashed Karnak into turning against the Inhuman royal family, and fighting the Avengers Academy.

Medusa warned Karnak that if he goes too far when fighting against a mind-controlled Black Bolt, then he'll have to face her. Later, she tasked him with the job of finding and training the NuHumans.

Karnak offered to teach Moon Girl how to control swapping bodies with Devil Dinosaur, so she doesn't do it by accident.

Karnak taught Quake some meditation techniques to improve her control over her powers.

Karnak is voiced by Howard Wang.

Karnak arrives as a boss.
Add a photo to this gallery 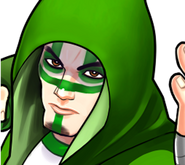 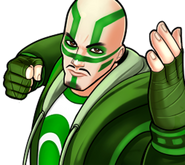 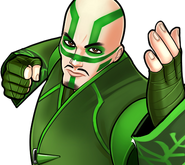 Karnak Rank 5
Add a photo to this gallery
Retrieved from "https://avengers-academy.fandom.com/wiki/Karnak?oldid=59333"
Community content is available under CC-BY-SA unless otherwise noted.