"I'm supposed to say something heroic here just because you want me to? Nice try."

The super powered private eye Jewel, civilian name Jessica Campbell Jones, is a Premium Character you could first recruit to your academy during the Daredevil Event. Her recruitment quests are First Shot and Get Jessica Jones! Her Mission Board Quests can be found here.

Each time Jessica Jones is upgraded, her Power Level increases.

Jessica Jones's Rank 3 outfit is a white, sleeveless bodysuit with blue trim along the chest, a blue belt with purple diamond at one hip, white knee-high boots, and blue finger-less gloves that go up to her elbows. Her black hair is tipped with blue.

Patsy and Jessica are close friends. Patsy bought a bunch of furniture to fix up Jessica's shabby office. 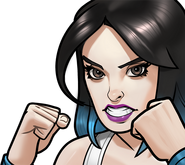 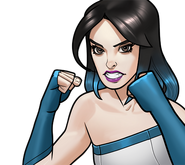 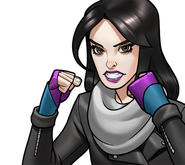 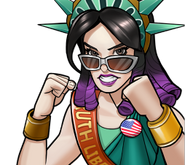 Avengers Jessica Jones
Add a photo to this gallery
Retrieved from "https://avengers-academy.fandom.com/wiki/Jessica_Jones?oldid=59533"
Community content is available under CC-BY-SA unless otherwise noted.