"Whosoever holds this hammer, if she be worthy, shall possess the power of Thor!"

The Mighty Thor, civilian name Dr. Jane Foster, is a character you could first recruit to your academy during the A-Force Event. Her Recruitment Quest is Get Thor! Her Mission Board Quests can be found here

Each time Thor is upgraded, her Power Level increases.

Jane Foster's Rank 1 appearance is a midriff sleeveless grey hoodie with an Asgardian symbol on the chest. She wears a silver head band, blue athletic pants with a grey and red stripe going down each leg, and brown boots.

Jane Foster's Rank 3 appearance is a midriff chestplate with a short red cape. She wears a belted green skirt over black leggings and black boots. Her eyes and nose are covered with a winged silver mask. She also wears a gauntlet on her left arm.

Jane Foster's Rank 5 appearance is a breastplate, a long red cape, a belted green and red skirt over black leggings, black boots, and a winged silver helmet. She also wears a silver cuff on her right arm and a gauntlet on the other.

When a new Thor arrived at Avengers Academy, Loki and Thor Odinson were stunned. Jane Foster kept her real identity a secret and sought out Odin, trying to understand why there were two Mjolnirs and why she'd been chosen to wield one. Odin stated that while Thor Odinson was absent that the realms still needed a Thor. Frigga recommended Jane Foster and Odin agreed.

With so many unanswered questions, Thor set out to uncover the timfog's secrets. Examining samples of the timefog, she discovered substances not identifiable in Iron Man's database, so she asked Doctor Strange to look at it. He wasn't able to learn anything about the timefog, but the Eye of Agamotto revealed the existence of hundreds of other Thors across the galaxy. Using that information, Jane reached out to Thor Corps, and made contact with Throg and Beta Ray Bill.

Jane Foster made first contact with Beta Ray Bill, through Thor Corps, before he came to the Academy.

Thor taught Groot how to fly with his magical hammer when he became Thor Groot.

Loki's nickname for Thor is "Thorita".

Jane Foster made first contact with Throg, through Thor Corps, before he came to the Academy.

Valkyrie recruits Thor to her new side team of Valkyries to defeat Hela.

Returning Hero Thor
Add a photo to this gallery 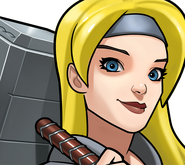 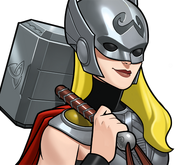 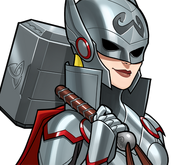 Paladin Thor
Add a photo to this gallery
Retrieved from "https://avengers-academy.fandom.com/wiki/Jane_Foster?oldid=59278"
Community content is available under CC-BY-SA unless otherwise noted.