Building Iron Man suits in her dorm room, Ironheart, civilian name Riri Williams, is a Premium Character you could first recruit to your academy during the Armor Wars Event. Her Introductory Quest was Get Ironheart! Her Mission Board Quests can be found here.

Ironheart was never released for combat in Avengers Academy 2.0.

Ironheart's Rank 1 outfit is a cropped black leather jacket over a red hoodie and yellow shirt, black pants, and red Ironheart armor boots. She wears a red and yellow gauntlet on one hand and a yellow glove on the other. She also wears a blue and yellow necklace.

Ironheart's Rank 3 outfit is a red hooded vest over a short-sleeved yellow shirt and a long-sleeved black undershirt. She wears black pants and knee-high red and yellow Ironheart armor boots and gauntlets. She also wears yellow goggles perched on top of her head.

Mockingbird offers to work with her, and Ironheart is thrilled to learn from her as a fellow scientist.

Shuri and Ironheart quickly bonded over their enthusiasm for inventing high-tech weaponry and became friends.

Whiplash tries to recruit Ironheart to his side during the Armor Wars Event, but she refuses.

Ironheart is voiced by Dani Chambers.

Ironheart Rank 5
Add a photo to this gallery 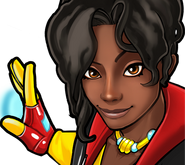 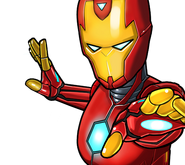 Ironheart Rank 5
Add a photo to this gallery
Retrieved from "https://avengers-academy.fandom.com/wiki/Ironheart?oldid=59379"
Community content is available under CC-BY-SA unless otherwise noted.