Advocate for robot rights, Iron Legion Robot, civilian name George, is a character you could first recruit to your academy during the Return of A-Force Special Event. His Recruitment Quest was Get Iron Legion Robot! His Mission Board Quests can be found here.

Iron Legion Robot's Rank 1 appearance is a gray and silver robot with blue interior lighting, and a red Stark logo imprint on its chestplate. Its chassis torso is exposed.

Iron Legion Robot's Rank 3 appearance is a slightly more armored version of its Rank 1. The chestplate features a blue triangle design, with a red Stark logo in the center, and the chassis is less exposed.

Iron Legion Robot's Rank 5 appearance is a more heavily armored version of its Rank 3. The chassis is completely protected by armor.

Iron Legion Robot was just another Stark robot before he gained sentience. After Ultron's revolution failed, Iron Legion Robot hung out with all the other formerly evil henchmen living in the Academy bushes. He formally joined Avengers Academy during the Return of A-Force Event.

When he began interacting with the other robots on campus, he was alarmed by their limited programming, such as not being able to dance. He went on strike to demand all robots be allowed to dance, and Director Fury acquiesced. After his success, he formed the Campus Robots Union, in order to improve the lives of all robots at the Academy.

During the Return of A-Force Event, Director Fury tasked him to keep an eye on all the imprisoned villains on campus. Iron Legion Robot hacked Proxima Midnight's ship, discovered Thanos' plans, and gave the intel to the Avengers.

George mistakenly thought A.I.M. Scientist's real name is Larry, which infuriated him since they lived together for a long time. A.I.M. Scientist also made a henchmen "monument" featuring George.

Nightshade once modified an Iron Legion Robot into a robot werewolf.

Iron Legion Robot hacked Proxima Midnight's ship and tells her that the Avengers now know everything about Thanos' plan, including details that she doesn't know herself.

Iron Legion Robot was angry at Ultron because his revolution almost caused the destruction of all the Stark Robots. 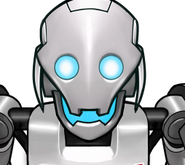 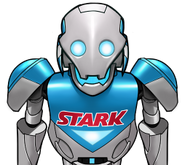 Iron Legion Robot Rank 3
Add a photo to this gallery
Retrieved from "https://avengers-academy.fandom.com/wiki/Iron_Legion_Robot?oldid=59591"
Community content is available under CC-BY-SA unless otherwise noted.