A past incarnation of Kang the Conqueror, Iron Lad, civilian name Nathaniel 'Nate' Richards, is a character you could first recruit to your academy during the Armor Wars Event. His Recruitment Quest was Get Iron Lad! His Mission Board Quests can be found here.

Iron Lad was never released for combat in Avengers Academy 2.0.

Iron Lad's Rank 1 outfit is a red vest with yellow buttons over a grey T-shirt, red shorts, red and grey boots, and red and grey gauntlets.

Iron Lad's Rank 3 outfit is a gray shirt, red shorts, and red boots. He wears a partial helmet with a visor, a chestplate, and gauntlets.

Kang is Iron Lad's future self. After Iron Lad sees all the horrible things Kang does in the future, he dedicates himself to stopping Kang and rewriting the future.

Ultron is furious at Iron Lad's treatment of his minions when he uses Growth Pollen to make them giants.

Iron Lad offers to help improve Whiplash's armor and weapons with tech from the future. He hopes Whiplash will forgive him for everything that his future self, Kang, does to him. He doesn't specify what exactly Kang does to Whiplash.

Iron Lad Rank 5
Add a photo to this gallery 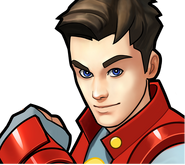 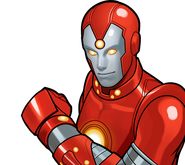 Iron Lad Rank 5
Add a photo to this gallery
Retrieved from "https://avengers-academy.fandom.com/wiki/Iron_Lad?oldid=59388"
Community content is available under CC-BY-SA unless otherwise noted.