"I am the Iron Fist. I hold back the storm when nothing else can. Then I chill."

The Living Weapon Iron Fist, civilian name Daniel Thomas Rand-K'ai, is a character you could first recruit to your academy during the Daredevil Event. His Recruitment Quests are Fist Bump! and Return of the Iron Fist! His Mission Board Quests can be found here.

Each time Iron Fist is upgraded, his Power Level increases.

Iron Fist's Rank 1 outfit is a neck wear and the Iron Fist tattoo on his chest. He has a green dragon button shirt with a yellow scarf thingy and rolled-up, yellow belt on the upper body, green belt on the lower body, khaki wristband, and a light brown jeans.

Iron Fist's Rank 3 outfit is a yellow and black mask and a green and yellow sleeveless jacket. He has a golden wristbands, green shorts with golden belt and leg cap, and a golden shoes.

Danny built a chill zone for Karnak with lots of scented candles and a soundtrack of whale noises.

Luke and Danny are best friends. When they're imprisoned by Kingpin, they each insist that Hellcat save the other one first.

Pepper and Danny go to the same yoga class.

Punisher once stuck Danny's head in a toilet. 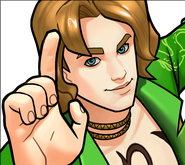 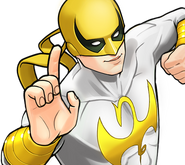 Immortal Weapon Iron Fist
Add a photo to this gallery
Retrieved from "https://avengers-academy.fandom.com/wiki/Iron_Fist?oldid=58861"
Community content is available under CC-BY-SA unless otherwise noted.