The galaxy's best shape-shifting space prince, Hulkling, civilian name Theodore "Teddy" Rufus Altman is a character you could first recruit to your academy during the Young Avengers Mini-Event. His Recruitment Quest is Get Hulkling. His Mission Board Quests can be found here.

Each time Hulkling is upgraded, his Power Level increases.

When Hydra attacked the Runaways team, Hulkling joined the fight to put Hydra away permanently. Given that Teddy's gay, and his boyfriend is Jewish, he felt very strongly about defeating Hydra.

Karolina Dean and Hulkling bonded over being part of the LGBT community and fighting Nazis, which the latter considered logical due to his boyfriend being Jewish and gay. Karolina found that to be romantic.

Loki's nickname for Hulkling is "Moldthing."

Hulkling and Wiccan are dating.

Hulkling is voiced by ???

Hulkling and Wiccan
Add a photo to this gallery 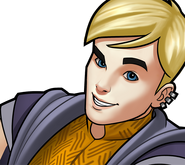 Hulkling Rank 5
Add a photo to this gallery
Retrieved from "https://avengers-academy.fandom.com/wiki/Hulkling?oldid=58773"
Community content is available under CC-BY-SA unless otherwise noted.