A deadly hitman, Hit-Monkey is a Premium Character you could first recruit to your academy during the Avengers Halloween Event 2017. His Recruitment Quest is Get Hit-Monkey! His Mission Board Quests can be found here.

Hit-Monkey Ad
Add a photo to this gallery 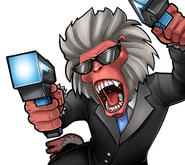 Hit-Monkey Rank 5
Add a photo to this gallery
Retrieved from "https://avengers-academy.fandom.com/wiki/Hit-Monkey?oldid=57943"
Community content is available under CC-BY-SA unless otherwise noted.