"Savior of the Gods! Champion of Mankind! Master of Chest Hair!"

Greek demigod, Hercules, is a character you could first recruit to your academy during the Monsters Unleashed Event. His Recruitment Quest is Get Hercules! His Mission Board Quests can be found here.

Hercules was never released for combat in Avengers Academy 2.0.

Hercules' Rank 2 appearance is a green tank top, brown pants with a belt and medallion buckle, and brown gladiator sandals. He also wears a gold bracelet on his right arm and a gold headdress.

Hercules' Rank 3 appearance is brown pants with a dark green utility belt, gold kneepads, and brown gladiator sandals. He also wears a gold bracelet on each arm and a gold headdress.

Despite how much Ares hates his half-brother Hercules, he admitted that he'd be honored to fight by his side.

Hercules and She-Hulk once went on a dinner date. She suggest they go on a second date sometime.

Hercules once lost a hot dog eating contest with Thor and Wasp. Wasp won. Hercules said she's the only person that can party harder than he can.

Hercules is voiced by ??

Hercules Rank 5
Add a photo to this gallery 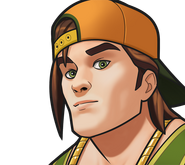 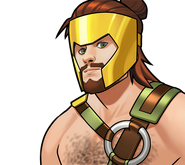 Hercules Rank 5
Add a photo to this gallery
Retrieved from "https://avengers-academy.fandom.com/wiki/Hercules?oldid=59395"
Community content is available under CC-BY-SA unless otherwise noted.