"If I miss, it means I'm just another dude with a bow. It means I've been fooling myself this whole time. And that's why I never miss."

Master marksman Hawkeye, civilian name Clinton Francis "Clint" Barton, was first available as early access for a limited time during the Ultron Revolution Special Event. His Introductory Quest was Better Late Than Never, pt. 1. His Mission Board Quests can be found here.

Each time Hawkeye is upgraded, his Power Level increases.

Hawkeye's Rank 1 outfit is a gray, black, purple, and white hoodie over a purple shirt. He has black pants, black and purple boots, fingerless purple gloves, a bracer on his right arm, and a quiver of arrows on his back.

Hawkeye's Rank 3 outfit is a navy blue and purple jacket over a white and purple shirt, black pants, and black boots. He wears a quiver, a bracer, kneepads, and purple-tinted sunglasses propped up on top of his head.

Hawkeye's Rank 5 outfit is a long black and purple coat with the hood drawn up over a white and purple shirt, black pants, and black and purple boots. He has armor on the shoulders of his coat. He wears a quiver, a bracer, and kneepads.

Shortly after joining Avengers Academy, Hawkeye's hearing aids stopped working. Instead of trying to fix the problem or attempting to read lips, Clint spent time sulking and feeling bad for himself, much to Natasha Romanova's anger. Eventually, Clint asked Tony Stark to build him a new set of hearing aids. Once he can hear again, Natasha expressed her frustration at his bad attitude whenever something goes wrong for him. Clint claimed that the only time he feels good about himself is when he's helping people. He decided to get back into helping regular people with everyday problems, and Natasha offered to partner up with him.

Clint and Natasha used to date. According to Clint, they broke up because he's "an idiot." Even with the end of their relationship, Kate tells Natasha that Clint can't stop thinking and talking about her. After Clint joins the Avengers Academy, Wasp swears that she's never seen Black Widow smile more.

When Clint's hearing aids break, Natasha was frustrated with him for feeling sorry about himself instead of fixing the problem. Afterwards, she told him how much his bad attitude and refusal to let others help bothered her. She then partnered up with him to help regular people with everyday problems.

Kate is his successor and his trusty partner. She is also his best friend.

Hawkeye was very excited to finally receive his nickname from Loki, but his hearing aids failed right as Loki was about to tell him.

Lucky is his best buddy, especially while in combat.

He and Bobbi used to date. She claims they broke up because he kept shooting her stuff with arrows, and his apartment smells like "a dog made of pizza."

Immediately after joining the Avengers Academy, Nick Fury told Hawkeye to be prepared to fight an underwater rival school in the future.

Shuri built Hawkeye's Ronin outfit using the same technology as used in the Black Panther suit, but made some adjustments to take Hawkeye's human physiology into account.

Hawkeye is voiced by Gus Sorola.

Official art of Hawkeye posted on the Avengers Academy Twitter

Hawkeye in the release trailer for the game.

Hawkeye's first appearance in the game, during the Beach Event Storyline 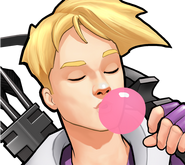 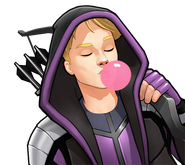 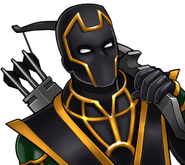