Science's number one fan, Dr. Henry "Hank" Pym is the Avengers Academy chemistry professor. He has his own lab where he teaches science classes. He first appeared as a NPC in dialogue cut scenes. He could later be recruited to Avengers Academy during the Legends Assemble Event. His introductory quest is That's Science!, pt. 1. His mission board quests can be found here.

Ant-Man and The Wasp Event Edit

Each time is upgraded, his Power Level increases.

Hank Pym's rank 1 appearance is a white lab coat over a red sweater with a blue dress shirt and jeans. He also wears metal bracer, a belt that allows him to change size at will, and black shoes.

Hank Pym's rank 3 appearance is a white jacket over a red and black bodysuit with black boots. He wears his belt and metal bracers.

Hank Pym's rank 5 appearance is a red and black bodysuit with an ant helmet, metal bracers, his belt, and black and gray boots.

Hank told Shuri that he's not the Hank Pym from the Avengers Academy Universe. and that this world's Hank Pym is still lost in the timefog.

Hank revealed to Nadia that his body is entirely robotic.

Hank warned Nick Fury that the universe is collapsing, citing the fact that super villains were attacking every month. He hypothesized that was caused by the large number of super powered individuals in one place.

Ant-Man and Hank Pym share the same shrinking-growing technology, although Ant-Man tends to only use it to shrink.

Hank taught Ant-Man how to fly on winged ants, instead of only riding wingless worker ants.

Crystal showed Hank Pym a compound that allowed him to study Inhuman DNA, so he can better understand Kree DNA.

Hank had a bet with Hope van Dyne about Schrodinger's cat, and asked Ghost to look into it, since she could look into the box without "Tampering with the results."

Goliath first started working with Hank Pym when he began his internship at Pym Tech.

Hope is Hank's daughter from an alternate reality.

When she arrived, they bonded over a love of science. He convinced her that she was only a cousin to Wasp

Hank Pym worked with Hulk a few times on experiments.

Hank seems to have taken a particular interest in Iron Man, even going so far as to electrocute him to make him "reach his full potential."

Hank wanted to run some experiments to discover the secret of Madame Gao's longevity.

Hank Pym thinks Man-Thing's brilliant, and is a huge fan of Project Gladiator.

Before Hank married Janet van Dyne in another reality, he had a relationship with Maria Trovaya. Unbeknownst to him, she became pregnant and had their daughter Nadia Pym. Hank kept a box of old photos and letters from Maria, which he later gave to Nadia.

Hank Pym didn't realize he had a daughter until Nadia Pym showed up at the Academy. He regrets not being able to help her as a child, but is proud of her resourcefulness and intelligence.

Hank Pym examined Redwing's telepathic link with Falcon, and declared it defied the laws of science.

Hank Pym wanted to experiment on Tiger Shark to see how his human-tiger-shark hybrid powers work.

Ultron and Hank Pym embarked on extended explorations of the multiverse. During one trip, they discovered the suit that became Elektra's Virtual Elektra outfit.

Hank mentioned on multiple occasions that he wishes to dissect Vision's brain.

Hank Pym in chat
Add a photo to this gallery 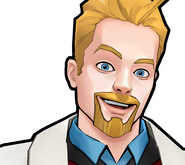 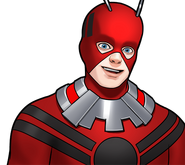 Wasp Hank Pym
Add a photo to this gallery
Retrieved from "https://avengers-academy.fandom.com/wiki/Hank_Pym?oldid=59496"
Community content is available under CC-BY-SA unless otherwise noted.