Male
Hand Ninja Boss is the secondary antagonist of the Defenders Event. During the event, Madame Gao sends him to battle the Avengers while she searches through Nick Fury's vaults.

The Hand Ninja Boss confesses he's jealous of Foggy Nelson, because he always wanted to be a lawyer, but his parents pressured him into being a ninja like his dad.

After Madame Gao is defeated by the Avengers, the Hand Ninja Boss informs her that the Hand voted to let her go, and elect a new leader. 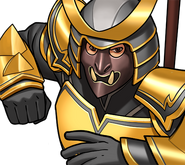 Add a photo to this gallery
Retrieved from "https://avengers-academy.fandom.com/wiki/Hand_Ninja_Boss?oldid=47057"
Community content is available under CC-BY-SA unless otherwise noted.