A super-powered feline, Hairball, civilian name Niels, is a character you could first recruit to your academy during the Pet Avengers Event. His Recruitment Quest is Get Hairball! His Mission Board Quests can be found here.

Each time Hairball is upgraded, his Power Level increases.

Hairball's Rank 1 appearance doesn't include any clothes. He appears as a normal, orange cat.

Hairball's Rank 3 appearance is an orange and blue collar and blue cuffs on his legs.

Hairball's Rank 5 appearance is a blue and orange suit and goggles.

Hairball was an ordinary cat before he was transformed in lab accident. He was bombarded with energy from an alternate dimension, and it granted him kinetic superpowers.

Falcon made Hairball promise not to kill any birds.

Hank Pym is a big fan of Hairball, but Hairball thinks he's kind of weird.

Loki thinks Hairball is superior to the rest of the Avengers Academy students.

Hairball and Tigra bond over being feline Avengers.

Zabu and Hairball don't get along very well.

New Recruit Hairball
Add a photo to this gallery 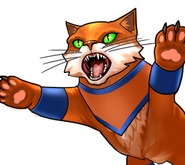 Hairball Rank 5
Add a photo to this gallery
Retrieved from "https://avengers-academy.fandom.com/wiki/Hairball?oldid=58023"
Community content is available under CC-BY-SA unless otherwise noted.