"I'm ready to turn over a new leaf, and do everything I can to help Avengers Academy... Trick or Treat!"

Super villain mastermind Green Goblin, civilian name Norman Virgil Osborn, was first introduced as an antagonist. He could later be recruited to your academy after his defeat during the Spider-Man Event. His Recruitment Quest is New Beginnings, Pt. 1. His Mission Board Quests can be found here.

Green Goblin was never released for combat in Avengers Academy 2.0.

Green Goblin's Rank 5 is his Green Goblin costume. He wears a sleeveless purple tunic with a brown belt, black leggings with kneepads, and purple boots. He also wears long purple gloves, a purple hat, and a brown messenger bag.

Green Goblin and Doctor Octopus have a difficult relationship. Each think they should be in charge of their operations at Avengers Academy.

Green Goblin pushed Dr. Curt Connors to take all of his lizard serum at once, transforming him into a humanoid lizard.

Loki's nickname for Green Goblin is "Emerald Gremlin". Loki tried to control Norman's Green Goblin personality, but ended up being tricked into unleashing the Green Goblin instead. 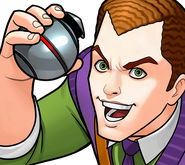 Green Goblin Rank 5
Add a photo to this gallery
Retrieved from "https://avengers-academy.fandom.com/wiki/Green_Goblin?oldid=59747"
Community content is available under CC-BY-SA unless otherwise noted.