Gorgon was first introduced as an antagonist, fighting for Maximus the Mad. He could later be recruited to your academy after his defeat during the Inhumans Event. His Recruitment Quest is Get Gorgon! His Mission Board Quests can be found here.

Gorgon was never released for combat in Avengers Academy 2.0.

Gorgon's Rank 1 appearance is an orange cowl-necked sweater with two red stripes across the arms and chest, and dark red capri pants.

Ares respects Gorgon as a fellow warrior. He encourages him to train the other Inhumans and help toughen them up.

Enchantress broke the Maximus the Mad's mind control over Gorgon. She wasn't sure if it would destroy his mind in the process, but it was a risk she was willing to take.

Gorgon helped Inferno learn how to control his powers by controlling his emotions.

Maximus brainwashed Gorgon into turning against the Inhuman royal family, and fighting the Avengers Academy.

Gorgon arrives as a Boss

Gorgon Rank 5
Add a photo to this gallery 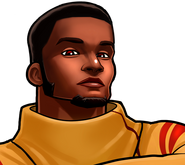 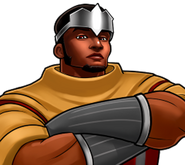 Gorgon Rank 5
Add a photo to this gallery
Retrieved from "https://avengers-academy.fandom.com/wiki/Gorgon?oldid=58297"
Community content is available under CC-BY-SA unless otherwise noted.