"They say when the Rider burns you, he burns your soul. I say it now too because it sounds cool."

The Spirit of Vengeance, Ghost Rider, civilian name Roberto "Robbie" Reyes, is a character you could first recruit to your academy during the Avengers Halloween Event. His Recruitment Quest was Get Ghost Rider! His Mission Board Quests can be found here.

Each time Ghost Rider is upgraded, his Power Level increases.

Ghost Rider's Rank 1 outfit is a short sleeved top with a white rectangle on the chest, and orange trim on the sleeves. He wears black trousers with orange stripes, a chain wallet, and black boots.

Ghost Rider's Rank 3 outfit is a black jacket with a white rectangle on the chest and orange trim, black trousers with chains hanging from both hips, and black boots.

Ghost Rider's Rank 5 outfit is his Ghost Rider form with a black body suit, with a white rectangular symbol on the chest, and fiery chains encircling his arms.

Ghost Rider is bonded with his uncle Eli's spirit. He believes Eli is a terrible person, but also the source of his abilities. Initially, Eli controlled him, used his body, and injured his brother, Gabe. Ghost Rider trained with S.H.I.E.L.D., and they taught him how to improve his control over his powers and and Eli's spirit.

Pepper Potts asked for Ghost Rider's help in defeating Red Skull and Baron von Strucker. After receiving assurances that his brother was protected, he agreed to join the battle. During the final fight against Red Skull and Hydra, Jemma Simmons opened a gateway to Hell for Ghost Rider to cast the Monolith into.

Ghost Rider's uncle sold his soul to Mephisto. After his uncle bonded with Ghost Rider, Mephisto claimed that he now owned Ghost Rider's soul, too. Ghost Rider confronted him and refused to cooperate.

Ghost Rider Ad
Add a photo to this gallery 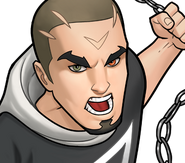 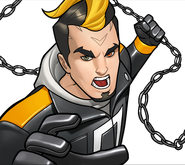 Cowboy Ghost Rider
Add a photo to this gallery
Retrieved from "https://avengers-academy.fandom.com/wiki/Ghost_Rider?oldid=59920"
Community content is available under CC-BY-SA unless otherwise noted.