Laying Down the Law

"Loyal Friend, Life Of The Party, Avocado At Law."

Co-founder of Nelson and Murdock law firm, Franklin 'Foggy' Nelson, is a character you could first recruit to your academy during the Defenders Event. His Recruitment Quest was Get Foggy! His Mission Board Quests can be found here.

Foggy Nelson was never released for combat in Avengers Academy 2.0.

Foggy Nelson's Rank 1 outfit is a green hoodie over a yellow shirt, black jeans, black shoes, and a red beanie.

Foggy and Matt have a law firm called “Nelson and Murdock“.

The Hand Ninja Boss confesses he's jealous of Foggy Nelson, because he always wanted to be a lawyer, but his parents pressured him into being a ninja like his dad.

Loki's nickname for Foggy Nelson is "Fatty Nielsen." Loki and Foggy like to party together.

New Recruit Foggy Nelson
Add a photo to this gallery 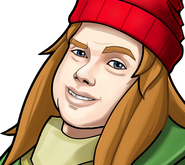 Foggy Nelson Rank 5
Add a photo to this gallery
Retrieved from "https://avengers-academy.fandom.com/wiki/Foggy_Nelson?oldid=57947"
Community content is available under CC-BY-SA unless otherwise noted.