"I've got the moves to be an Avenger. And the jetpack doesn't hurt."

The friendly flier Falcon, civilian name Samuel Thomas "Sam" Wilson, is the fourth recruitable character in Avengers Academy. His Recruitment Quest is Get Ready For Takeoff! His Mission Board Quests can be found here.

Each time Falcon is upgraded, his Power Level increases.

Sam's Rank 1 outfit is white jacket with red shoulders and sleeves, a gray shirt underneath, and black pants. He wears a jetpack backpack that his wings extend from.

Sam's Rank 3 outfit is midway between his Rank 1 and Rank 5 outfits. His jacket is now zipped and almost completely red, and he has metal shoulder pads.

Sam's Rank 5 outfit is his Falcon flight suit. The top is visually similar to the jacket, but the flight suit is one piece. His forehead and ears are covered by white fabric, and he's wearing red glasses.

Natasha is vaguely threatening towards Sam, as she is towards everyone. Sam insisted on joining Natasha to infiltrate a Hydra base. The mission seemed too easy and he confronted her, saying she either really hates him or really likes him and wants him to be her boyfriend. She gave him an evasive answer, not committing to either. She went on a date with him that she claimed was a mission to provide looped video to trick Fury, but later admitted that her cover story was untrue. Later, after Falcon goes on a study date with Ms. Marvel, Natasha appeared to be jealous.

Falcon made Hairball promise not to kill any birds.

Iron Man and Sam are friends. When they met, Sam complimented Tony's engineering and Tony complimented Sam's flying. They also had a "boy's night out" with Loki in the Stark Tower hot tub.

Falcon had a crush on Hope van Dyne.

Loki has a tempestuous relationship with everyone at the Academy, including Sam. They had a "boy's night out" with Tony in the Stark Tower hot tub.

Madame Hydra told Sam that she was disapointed he went to Avengers Academy instead of Hydra Academy.

Ms. Marvel was kind of dating Sam after a study date/date mix up.

Nick Fury thinks that Sam is as much of an Avenger as any of the ones with powers.

Falcon gave Okoye permission to train his penguins as bodyguards. Falcon questioned why Okoye told him about one of Wakanda's most precious secrets, the Heart-Shaped Herb, and Okoye said the Avengers had proven themselves trustworthy.

Patriot credits Falcon with showing him how to be a hero.

Pepper Potts found and recruited Sam to the Avengers Academy.

Falcon and Redwing share a telepathic link, and are long-time super hero partners.

Satana asked for Falcon's help in persuading more demons to join her side in overthrowing Mephisto. She asked him to use his Penguin outfit, because penguins are beloved in Hell.

When Jessica first showed up at the Academy, Wasp and Falcon immediately trusted her and wanted to help her carry out her missions. Both of them were a little starstruck by the double agent. Sam has a crush on her. He repeatedly asked her out, but she declined.

Falcon is voiced by A$ap Rocky.

Outfit Unlocked! Infinite Falcon
Add a photo to this gallery 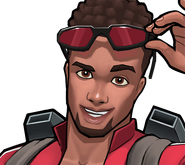 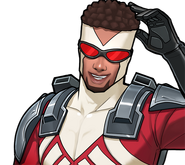 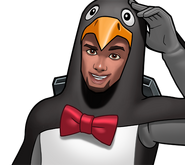 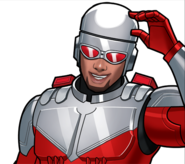 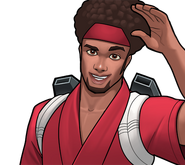 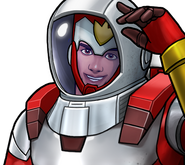 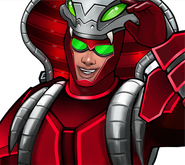 Infinite Falcon
Add a photo to this gallery
Retrieved from "https://avengers-academy.fandom.com/wiki/Falcon?oldid=59462"
Community content is available under CC-BY-SA unless otherwise noted.