A legendary monster hunter, Elsa Bloodstone, is a character you could first recruit to your academy during the Monsters Unleashed Event. Her Recruitment Quest is Get Elsa Bloodstone! Her Mission Board Quests can be found here.

Each time Elsa Bloodstone is upgraded, her Power Level increases.

Elsa has fair skin, red hair in a ponytail, and sea-green eyes.

Elsa Bloodstone's Rank 1 outfit is a black midriff vest with dark orange trim, ripped dark gray jeans, and black boots. She wears sunglasses, a black bow in her hair, a black and red choker, fingerless black gloves, and a dark orange band on her forearm. She also has a dark orange sweatshirt tied around her waist.

Elsa asked Sif to be her backup, just in case things went south when she approached the Legion of Monsters while looking for her brother.

Union Jack invited Elsa to join the Braddock Academy, but she declined. He also helped her search for her brother, introducing her to the Legion of Monsters, a benevolent group, that claimed to know where her brother was being kept.

Elsa Bloodstone Rank 5
Add a photo to this gallery 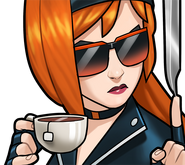 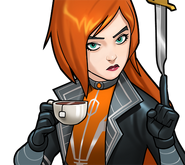 Elsa Bloodstone Rank 5
Add a photo to this gallery
Retrieved from "https://avengers-academy.fandom.com/wiki/Elsa_Bloodstone?oldid=57915"
Community content is available under CC-BY-SA unless otherwise noted.