"I am Elektra Natchios. The greatest assassin this world has ever known. Not even the stars are safe in the sky."

The greatest assassin, Elektra, civilian name Elektra Natchios, is a character you could first recruit to your academy during the Daredevil Event. Her Recruitment Quest is Get Elektra! Her Mission Board Quests can be found here.

Each time Elektra is upgraded, her Power Level increases.

Elektra's attacks are all armor penetrating.

Elektra's Rank 1 outfit is a red one-shoulder strap crop top, a red skirt, a maroon sash tied around her waist, silver high-heels, silver bracelets, a red cuff around her left bicep, and a red choker.

Elektra's Rank 3 outfit is a red tank top, maroon capris, a red sash tied around her waist, silver boots, maroon and red bracers with fingerless gloves, and a red headband.

Elektra's Rank 5 outfit is a maroon tank top with belted tabard, red leggings, thigh-high maroon boots, maroon gloves that go up to her biceps, a red sash covering her from throat to nose, and a red bandana over her hair.

Elektra enjoys flirting with Daredevil and often takes him on dates that usually threaten his life.

Elektra is thrilled about Keeper Murdock's arrival. She said having him and Daredevil at the Academy at the same time is like a dream come true.

Elektra is voiced by Sarah Stallman.

Virtual Elektra Ad
Add a photo to this gallery 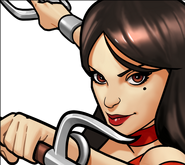 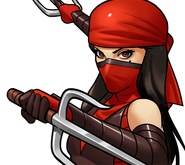 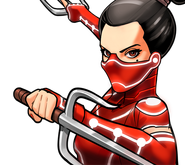 Virtual Elektra
Add a photo to this gallery
Retrieved from "https://avengers-academy.fandom.com/wiki/Elektra?oldid=58857"
Community content is available under CC-BY-SA unless otherwise noted.