Sinister conduit of electricity Electro, civilian name Maxwell Dillon, is a character you could first recruit to your academy during the Spider-Man Event. His Recruitment Quest was The Light Show! His Mission Board Quests can be found here.

Each time Electro is upgraded, his Power Level increases.

Electro's Rank 3 outfit is a green and yellow tracksuit with yellow lightning bolts on the chest and ankles, yellow headband, green sunglasses, and yellow tennis shoes.

Electro's Rank 5 outfit is a green bodysuit and cowl, with yellow lightning bolts on the chest, legs, and cowl. He also wears yellow elbow-length gloves.

Mysterio busted Electro out of jail to recruit him to work along side the symbiotes.

Electro is voiced by Steven Ross.

Character Upgraded! Electro Rank 5
Add a photo to this gallery 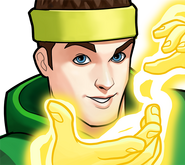 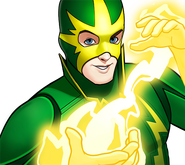 Electro Rank 5
Add a photo to this gallery
Retrieved from "https://avengers-academy.fandom.com/wiki/Electro?oldid=58040"
Community content is available under CC-BY-SA unless otherwise noted.