Guardians of the Galaxy

"I hope you brought your appetite for destruction."

Each time Drax is upgraded, his Power Level increases.

Drax has green skin and black eyes. He has red tattoos over his face, chest, and arms.

Drax's Rank 1 outfit is a white shirt with a red symbol on his chest, black pants, and knee-high black boots. He also wears metal bracelets.

Drax's Rank 3 outfit has no shirt. He wears red pants with kneepads and boots. He also wears gauntlets on both arms. He has a metal collar around his neck and a metal belt.

Gamora is a fellow member of The Guardians of The Galaxy.

Rocket Raccoon is a fellow member of The Guardians of The Galaxy.

Groot is a fellow member of The Guardians of The Galaxy.

Drax is voiced by David Sobolov.

Drax in his Escape Pod

Outfit Unlocked! Galactic Drax
Add a photo to this gallery 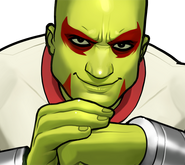 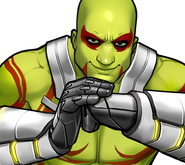 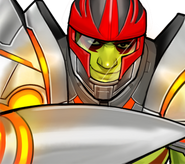 Galactic Drax
Add a photo to this gallery
Retrieved from "https://avengers-academy.fandom.com/wiki/Drax_the_Destroyer?oldid=59744"
Community content is available under CC-BY-SA unless otherwise noted.