"Can I interest you in becoming immortal?"

The Lord of the vampires, Vlad Dracula, was first introduced as an antagonist, fighting for Mephisto. He could later be recruited to your academy after his defeat during the Avengers Halloween Event. His Recruitment Quest is Get Dracula! His Mission Board Quests can be found here.

Dracula was never released for combat in Avengers Academy 2.0.

Dracula's Rank 3 outfit is a black coat over a red sweater vest and black tie. His black pants are ripped, and his hair now reaches down to his shoulders.

Dracula's Rank 5 outfit is a long black coat with a huge collar in the back over a red dress shirt. His pants are ripped and he wears knee-length boots. His hair is now past his shoulders, and his eyes are glowing red.

Dracula and Blade have a truce, so Blade doesn't stake him.

Dracula is voiced by ???

Dracula appears as a Boss Fight

Dracula Rank 5
Add a photo to this gallery 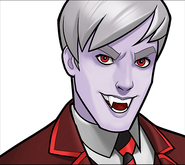 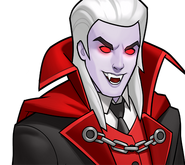 Dracula Rank 5
Add a photo to this gallery
Retrieved from "https://avengers-academy.fandom.com/wiki/Dracula?oldid=57929"
Community content is available under CC-BY-SA unless otherwise noted.