"I am Doctor Voodoo. Master of the spirit world. When I roar, the earth trembles."

The Houngan Supreme, Doctor Voodoo, civilian name Jericho Drumm, is a character you could recruit to your academy during the Marvel's Doctor Strange Event. His Recruitment Quest is Get Doctor Voodoo! His Mission Board Quests can be found here.

Each time Doctor Voodoo is upgraded, his Power Level increases.

Doctor Voodoo's Rank 3 outfit is a black short sleeve shirt with white symbol, black jeans with white bones painted on them, red sash around his waist with a skull at his hip, black boots, black and white bracelets, and a green scarf around his neck with a bone necklace.

Doctor Voodoo's Rank 5 outfit is a black bodysuit painted with white bones and symbols over the legs, chest, and arms, a long green sash around his waist with two skulls at his hip, white bindings wrapped around his wrists and ankles, black boots, a red cloak, bone necklace, and a skull mask.

Adam's music moves Doctor Voodoo so much, both his souls briefly leave his body.

Doctor Voodoo warned Iron Man that he had a vision of Iron Man's robots taking over Avengers Academy and killing everyone.

Doctor Voodoo is voiced by ???. 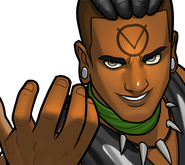 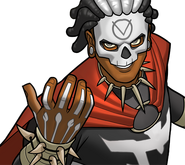 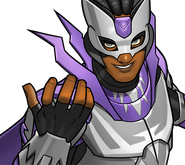 Elemental Doctor Voodoo
Add a photo to this gallery
Retrieved from "https://avengers-academy.fandom.com/wiki/Doctor_Voodoo?oldid=57919"
Community content is available under CC-BY-SA unless otherwise noted.