"I want to be able to move worlds and shake them to their foundations. I want enough power in my hands to tear planets from the heavens and place them in a new sky. Is that too much to ask?"

The Sorcerer Supreme, Doctor Strange, civilian name Dr. Stephen Vincent Strange, is a character you could first recruit to your academy during the Marvel's Doctor Strange Event. His Recruitment Quest is Get Doctor Strange! His Mission Board Quests can be found here.

Each time Doctor Strange is upgraded, his Power Level increases.

Doctor Strange's Rank 1 outfit is a blue t-shirt, black pants, and gray shoes. He wears a striped red and orange scarf, gray bracelets, and several rings on each hand.

Doctor Strange's Rank 3 outfit is a light blue vest over his blue t-shirt, black pants with a gold belt, and black shoes. He wears a small red cape, gray bracelets, and several rings on each hand.

Doctor Strange's Rank 5 outfit is a blue robe, the Cloak of Levitation, the Eye of Agamotto, and dark blue boots. He also has small gold bags hanging from his belt.

With so many unanswered questions about the timefog, Jane Foster studied timefog samples and discovered substances not identifiable in Iron Man's database, so she asked Doctor Strange to examine them. He wasn't able to learn anything about the timefog, but the Eye of Agamotto revealed the existence of hundreds of other Thors across the galaxy. Using that information, Jane reached out to Thor Corps, and made first contact with Throg and Beta Ray Bill.

The Ancient One Edit

Strange finds The Ancient One and frees her, only to find out she could've freed herself. She said she wanted to see her students grow in a different environment and help defeat Kaecilius.

Natasha wants to go into the Dark Dimension to fight whatever Mephisto conjured. Strange helps by reluctantly giving her body to Cthulhu where fights for control. Black Widow wins and heads down to the Dark Dimension only to find two female sorcerers already fighting the Dark forces. This leaves Strange puzzled and decides best to face it another day, which to Black Widow's concerns, will be soon.

Strange decides they'll need a different type of magic in order to defeat Kaecilius. So he tries to recruit Jericho, Master of Voodoo Magic.

Tony still doesn't believe that magic is real, so he makes his own costume. Now Wizard Tony tries a bunch of Strange's tricks and fails, eventually giving in and calling him and Strange, "Science Magic Bros!"

Loki's nickname for Doctor Strange is "Mister Weirdo." He and Doctor Strange have a strained relationship, with Loki once wiping Strange's memory of all his spells. He insults Strange even when he compliments him.

Mordo and Strange have a long lasting rivalry. Mordo's jealous of Strange, repeatedly saying he is the more powerful one and the true "Sorcerer Supreme."

Doctor Strange is voiced by ???.

Artwork of Doctor Strange from the World News Teaser.

Doctor Strange Concept Art
Add a photo to this gallery 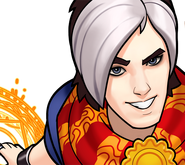 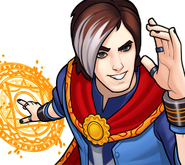 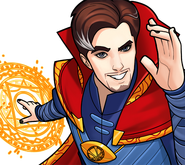 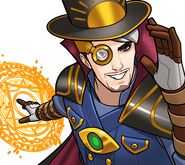 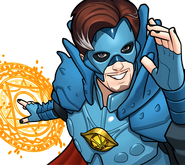 Elemental Doctor Strange
Add a photo to this gallery
Retrieved from "https://avengers-academy.fandom.com/wiki/Doctor_Strange?oldid=58880"
Community content is available under CC-BY-SA unless otherwise noted.