"No one deserves this more than me..."

Second in-command of the Sinister Six, Doctor Octopus, civilian name Otto Gunther Octavius, was first introduced as an antagonist, fighting for the Sinister Six. He could later be recruited to your academy after his defeat during the Spider-Man Event. His Recruitment Quest is Give Him a Hand! His Mission Board Quests can be found here.

Each time Doctor Octopus is upgraded, his Power Level increases.

Doctor Octopus's Rank 1 outfit is a plaid orange vest on top of a grey button down shirt. He has green pants, square sunglasses, and a bowl haircut. He wears his mechanical arm pack on his back.

Doctor Octopus's Rank 3 outfit is an open white lab coat over a plaid-patterned orange vest and grey button down shirt. His glasses are now round, and have a bright red line in the middle. He also wears yellow boots and green pants. He wears his mechanical arm pack on his back.

Doctor Octopus's Rank 5 outfit is a white lab coat with dark green accents. His glasses have bright red crosses inside, and he wears yellow boots and gloves. His haircut is shaped like a bird beak. His mechanical arm pack has been upgraded.

With the pretext of wanting to work with the Academy geniuses, Norman Osborn decided to move his Oscorp Institute close to the Avengers Academy. Doctor Octopus and the Lizard advised him not to do that, telling him that doing that would potentially jeopardize their secret plan.

Worried about Spider-Man possibly interfering with their plans again, they recreated Spider-Man webs in their labs, and committed various crimes around New York using it, making it look like Spider-Man was the one committing the crimes.

When The Lizard failed to stop the Academy students, Doctor Octopus built an army of his "Octobots". These robots tried to stop the creation of film reels, power cells and data chips, but ultimately failed when Spider-Man (and the recently reformed Lizard) hacked into the Octobots and stopped them. When Doc Ock himself was defeated, he became an Academy student and helped the other students stop Norman Osborn and Oscorp.

The Green Goblin is a fellow member of the Sinister Six. After Doc Ock's Octobots fail to keep the Academy students at bay, Goblin playfully insults him until Ock gets angry.

The Lizard is a fellow member of the Sinister Six. When Curtis tried to work at his lab, Octavius told him not to mingle with his tentacles or else there would be a conflict. 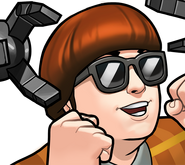 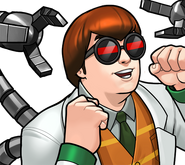 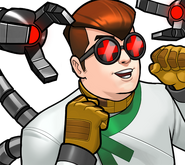 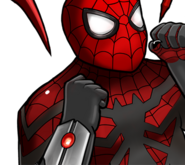 Superior Doctor Octopus
Add a photo to this gallery
Retrieved from "https://avengers-academy.fandom.com/wiki/Doctor_Octopus?oldid=58088"
Community content is available under CC-BY-SA unless otherwise noted.