"Glad to know I'm not the only one whose heart is racing. Let's get to work..."

Blind lawyer and vigilante Daredevil, civilian name Matthew Michael Murdock, is a character you could first recruit to your academy during the Daredevil Event. His Recruitment Quests are The Man Without Fear! and Daredevil is Back! His Mission Board Quests can be found here.

Each time Daredevil is upgraded, his Power Level increases.

Daredevil's Rank 1 outfit is a collared red shirt with its sleeves rolled up, buttons done up to the top with a red bow-tie, and DD embroidered on the breast pocket. His pants are a darker red, and his weapon is tucked into the left side pocket. He's also wearing a watch, red-tinted sunglasses, a black belt, and black shoes with white soles.

Daredevil's Rank 3 outfit is a red shirt with a small DD symbol, red pants, a black belt, black boots, black and white striped bracers, nun-chucks strapped to his right thigh, and a black scarf tied as a mask over his eyes.

Daredevil's Rank 5 outfit is a red, armored bodysuit, with a DD symbol on the chest. He also wears a black belt, black bracers, black boots, a red helmet and mask, and nun-chucks strapped to his right thigh.

Kingpin made a bargain with Mephisto to learn Daredevil's real identity, Matt Murdock. Mephisto saw another timeline where Kingpin broke Daredevil, and Daredevil became a ruthless leader of the Hand. The devil was curious what would happen in this timeline, so he gave the info to Kingpin.

Kingpin told Madame Gao that he found out Daredevil's identity so she'd let him use the Hand to attack the Academy. Kingpin threatened to expose Daredevil's secret identity, and make his loved ones vulnerable to attack from the super hero's many enemies. Daredevil decided to make his identity public, negating Kingpin's threat.

Elektra enjoys flirting with Daredevil and often takes him on dates that usually threaten his life.

J. Jonah Jameson suspected that Daredevil was really Matt Murdock. He was vindicated when Daredevil revealed his secret identity during the Hell's Kitchen Halloween Event.

Keeper Murdock and Daredevil don't get along, and they're very competitive. Daredevil doesn't trust him because he worked with Maestro.

Daredevil referred Nadia Pym to Avengers Academy when she contacted him in her search for Hank Pym.

Upon first meeting, Pepper and Matt flirted with each other. Later, she was upset after she found out Daredevil purposely withheld knowledge from her that Bullseye wanted to kill her.

Matt flirts with She-Hulk, but she turned him down gently.

Daredevil is voiced by Matt Ellis.

The Outfits Without Fear Ad
Add a photo to this gallery 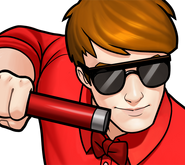 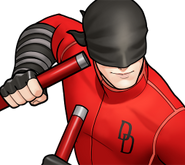 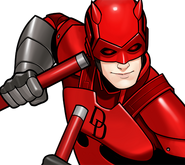 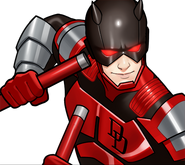 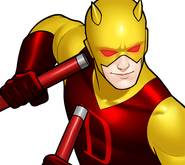 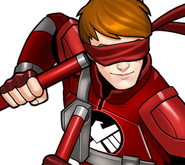 Devil Daredevil
Add a photo to this gallery
Retrieved from "https://avengers-academy.fandom.com/wiki/Daredevil?oldid=58870"
Community content is available under CC-BY-SA unless otherwise noted.