Princess of the Inhumans, Crystal is a character you could first recruit to your academy during the Inhumans Event. Her Recruitment Quest is Get Crystal! Her Mission Board Quests can be found here.

Each time Crystal is upgraded, her Power Level increases.

Crystal's Rank 5 appearance is a body suit with a gold torso, blue arms, gold bands on her wrists, and a black and blue diamond pattern decorating the torso. She also wears knee-high black boots.

Crystal shows Hank Pym a compound that allows him to study Inhuman DNA, so he can better understand Kree DNA.

Loki's nickname for Crystal is "Crinkle." He tries to gain her favor when they meet, but she quickly calls him out for sucking up to her because of her royal family.

Maximus kept Crystal locked up for weeks when he seized control of Attilan Academy and invaded the Avengers Academy.

Ronan mocks Crystal for forming alliances with other nations, but not the Kree. He warns her that now the Inhumans have allied with the Avengers Academy, they consider them a threat.

Crystal is voiced by Andria Betances.

Crystal Rank 5
Add a photo to this gallery 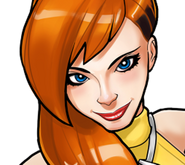 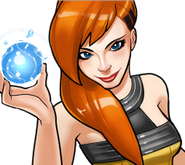 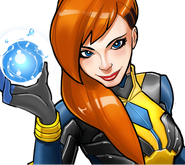 Crystal Rank 5
Add a photo to this gallery
Retrieved from "https://avengers-academy.fandom.com/wiki/Crystal?oldid=59593"
Community content is available under CC-BY-SA unless otherwise noted.