Mercenary for hire Crossbones, civilian name Brock Rumlow, is a character you could first recruit to your academy during the Civil War event. His Recruitment Quest is Defect and Destroy, Pt. 1. His Mission Board Quests can be found here.

Each time Crossbones is upgraded, his Power Level increases.

Crossbones' Rank 1 outfit is a black sleeveless t-shirt with a crossbones picture on it, maroon jeans, black boots with white laces, gloves with skeleton hands painted on them, a spike-belt with a skeleton buckle. He also has white face paint, crossbones tattoos on his right hand, and Hydra tattoos on his left hand.

Crossbones' Rank 3 outfit is a bulletproof jacket with crossbones painted on it, and a grey t-shirt beneath the jacket. His gloves have been modified and he has metal knee pads and calf pads over his jeans. He also wears running shoes and his belt is a normal silver belt.He now wears a more intimidating skull mask, instead of face paint.

Crossbones used to be a student that attended Hydra School.

Crossbones was part of the Hydra group that terrorized Avengers Academy during the conflict between Tony and Steve.

Director Fury created the Thunderbolts because he wanted a team that would do the dirty work that the other students wouldn't do. So the team consisted mostly of former criminals that wanted to turn their life around.

He joined the Thunderbolts and was tasked with the job to recruit more members.

Crossbones wants to be Captain America's rival, but it's a rather one-sided relationship.

Loki's nickname for Crossbones is "Bone Head". In his campaign to torment Auran, Loki pays Crossbones with pizza to make a lot of noise and keep her from getting any sleep.

Odin thinks that there is potential in Crossbones, potential that he can use for the side of good—if given the right incentive.

Taskmaster and Crossbones were classmates at Hydra Academy before joining Avengers Academy.

Crossbones is initially concerned that Zombie Crossbones will ruin his reputation as a good guy. He quickly changed his mind, and decided to masquerade as Zombie Crossbones to get close to Baron von Strucker and find out his plans.

Crossbones is voiced by ???.

Returning Hero Crossbones
Add a photo to this gallery 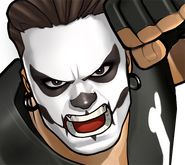 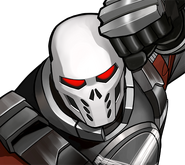 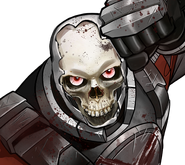 Zombie Crossbones
Add a photo to this gallery
Retrieved from "https://avengers-academy.fandom.com/wiki/Crossbones?oldid=59226"
Community content is available under CC-BY-SA unless otherwise noted.