Experienced Detective
Master Swordswoman
She Will Cut You

A samurai and detective, Colleen Wing is a character you could first recruit to your academy during the Defenders Event. Her Recruitment Quest was Get Colleen Wing! Her Mission Board Quests can be found here.

Each time Colleen Wing is upgraded, her Power Level increases.

Colleen Wing's Rank 5 outfit is a white and blue jacket with the hood drawn up, white pants, and white sneakers.

Claire joins Colleen's dojo to learn how to defend herself against opponents like the Hand.

Colleen Wing agreed to participate in the Grandmaster's fight club, in exchange for a new bike engine if she won.

Misty and Colleen are best friends and partners in a private investigation firm, Knightwing Restorations, Ltd.

Stick attempted to recruit Colleen to the Chaste, but she declined.

New Recruit Colleen Wing
Add a photo to this gallery 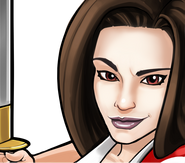 Colleen Wing Rank 5
Add a photo to this gallery
Retrieved from "https://avengers-academy.fandom.com/wiki/Colleen_Wing?oldid=59588"
Community content is available under CC-BY-SA unless otherwise noted.