The Guardians of The Galaxy

Elders of the Universe

"You have a very unique look. I would love to give you a tour of my collection..."

The Collector, civilian name Taneleer Tivan, was first introduced as an antagonist, fighting for Ayesha and the Sovereign. He could later be recruited to your academy after his defeat during the Guardians of the Galaxy Vol. 2 Event. His Recruitment Quest is Get Collector! His Mission Board Quests can be found here.

Collector was never released for combat in Avengers Academy 2.0.

Collector's Rank 1 appearance is a short-sleeved shirt covered in white feathers with red sleeves and a black turtle neck collar. Two white and black feathers are pinned to his breast pocket. He wears long black shorts, white knee-high socks and black sneakers. He has white gloves and large gold glasses.

Collector initially worked with Ayesha battling the Avengers in order to obtain the Infinity Gauntlet. After being beaten, he betrays her and joins Avengers Academy.

The Collector tries to add Devil Dinosaur to his museum, but Moon Girl stops him.

When the Collector tries to acquire Devil Dinosaur for his museum, Lunella stops him. Based off her research of his home planet, Cygnus X-1, he's not truly immortal.

Director Fury gives the Collector permission to acquire new specimens for his museum while on Earth, as long as he doesn't harm any of the Avengers Academy students.

The Collector is voiced by Billy Kametz.

Collector arrives as a boss fight

Collector Rank 5
Add a photo to this gallery 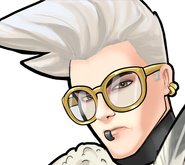 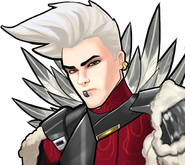 Collector Rank 5
Add a photo to this gallery
Retrieved from "https://avengers-academy.fandom.com/wiki/Collector?oldid=57993"
Community content is available under CC-BY-SA unless otherwise noted.