Chitauri Soldier, civilian name Rekh, is a character you could first recruit to your academy during the Return of A-Force Special Event. His Recruitment Quest was Get the Chitauri Soldier! His Mission Board Quests can be found here.

Chitauri Soldier was never released for combat in Avengers Academy 2.0.

Chitauri Soldier's Rank 1 outfit is a purple bodysuit. The top reveals his chest, and has white and gold accents on the arms, collar, and hips. He wears gold thigh holsters, gold gauntlets, gold boots, gold armor knee-pads, and a tan and gold helmet. He also has a grey v-shaped implant right below his neck and above the chest.

Chitauri Soldier's Rank 3 outfit is bodysuit. The top reveals his chest, and is covered in gold and black armor plating except for the abdomen. His purple pants have a white stripe down both legs. He wears black boots, gold gauntlets, gold pauldrons, and a gold helmet that completely covers his face. His chest implant is now gold.

Since Ronan's defeat during the Guardians of the Galaxy Event, Rekh lived in the Avengers Academy bushes. When Proxima Midnight attacked the Academy, he joined the fight against her.

Hank Pym helped Rekh break out of his hive mind. Upon joining the Academy, Black Widow and Mantis helped him adjust to and learn about Earth after Wasp and Mantis convinced Star-Lord to give him a chance with the Guardians of the Galaxy. Star-Lord invited him on a mission to steal a weapon from a museum on Xandar before it fell into the wrong hands. Rekh and Drax the Destroyer acted as the distraction for the rest of the team to move in.

Black Widow helped the Chitauri Soldier fit in and adjust to Earth, starting with the proper way to hold a weapon.

Gamora agreed to work with the Chitauri Soldier because she admired his skills when he fought alongside Ronan.

Thanks to Professor Pym, Rekh was able to break out of his hive control and live on his own.

Mantis and the Chitauri Soldier bond over a mutual appreciation for shiny things. She helped him fit in and adjust to Earth.

The Chitauri Soldier asked Pepper Potts out on a date, but she turned him down.

When Ronan attacked the Academy, Rekh was a part of his army.

Star-Lord convinced him to not fight the Academy and asked him to try lemonade. He later took care of Rekh in the bushes when he had a lot of lemonade and was sick. Star-Lord forgot his name by the time Rekh joined the Academy. Rekh was invited by Star-Lord to join the Guardians of the Galaxy.

New Character! Chitauri Soldier
Add a photo to this gallery 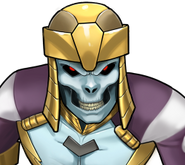 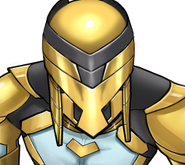 Chitauri Soldier Rank 3
Add a photo to this gallery
Retrieved from "https://avengers-academy.fandom.com/wiki/Chitauri_Soldier?oldid=58070"
Community content is available under CC-BY-SA unless otherwise noted.