Chitauri Boss is a secondary antagonist in the Return of A-Force Special Event. During the event, Proxima Midnight sends him to battle the Avengers. He leads an army of Chitauri.

Proxima Midnight sent him to battle the Avengers when she attacked the Academy. She later warned him that Thanos might kill him for losing to the Avengers.

Chitauri Warrior was a part of his army and battled the Avengers under his order.

After the Chitauri Boss's defeat, Nick Fury allowed him to live in the Academy shrubbery so Thanos wouldn't kill him.

Proxima Midnight and Chitauri Boss
Add a photo to this gallery 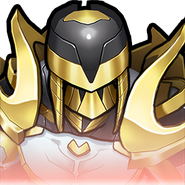 Chitauri Boss
Add a photo to this gallery
Retrieved from "https://avengers-academy.fandom.com/wiki/Chitauri_Boss?oldid=50176"
Community content is available under CC-BY-SA unless otherwise noted.