Psychopathic serial killer, Carnage, civilian name Cletus Kasady, is the primary antagonist in the Spider-Man Event Act 2. During the event, he sent Symbiotes to roam the campus and battle the students. He's an ally to Venom.

He was also appeared as a secondary antagonist in the Avengers Under Siege Event.

Carnage and Spider-Man have clashed several times and are long-time enemies.

Venom and Carnage are partners at the beginning of the event, but they end up on opposite sides as things progress. Carnage thinks Venom is weird because he talks about himself in third person. 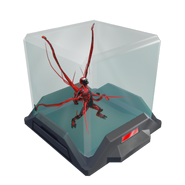 Carnage trapped in his cell

Battle Carnage
Add a photo to this gallery 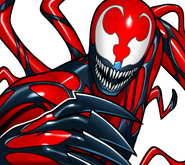 Add a photo to this gallery
Retrieved from "https://avengers-academy.fandom.com/wiki/Carnage?oldid=47910"
Community content is available under CC-BY-SA unless otherwise noted.